Located in the Balule Nature Reserve, the aptly named Paradise Camp is a slightly rustic but comfy, camp, it even has flushing toilets and showers, open air of course; no doors or walls but a stick screen to provide a degree of modesty from human eyes, the wildlife on the other hand are free to stop and stare or you’ll be joined by a millipede or two or some other creature as you go about your business! There is also electricity when the sun shines (which thankfully was often during my stay) thanks to the odd solar panel, what more do you need in paradise? 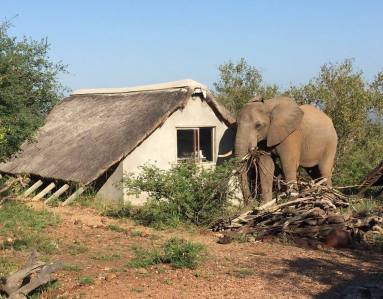 Paradise Camp is proud to claim that it is one of the only camps to not have a fence surrounding it, meaning that all creatures great and small, friendly or fierce are free to roam where ever they please (quite rightly too!). One evening, after returning from an excursion into the local town of Hoedspruit, we discovered that the creatures of the area certainly do exercise their right to roam.

As we got out of the Landrover we could see a light from the game viewing tower. The Research Assistant called to us to warn us that the camp appeared to have some new guests.  We all made it up the tower and listened and sure enough you could hear the tell tale sound of branches being broken punctuated by the deep tummy rumbles of an elephant located just behind the left hand toilet (why, oh why hadn’t I gone to the loo in town???).

As we continued to listen we could another elephant, this time near one of the cabins, so going to bed AND going to the toilet were both out of the question, may as well make ourselves comfy on the tower.  Another elephant could then be heard near the car park. They had obviously heard about Craig Spencer’s fabulous cooking skills over the camp fire (he’s won awards for his skills so I’m told), or maybe they felt sorry for the Research Assistant whom we had abandoned in camp, or maybe it was those irresistible marula trees that had brought them into camp either way the weren’t in a hurry to move so we sat and enjoyed their company.

I stayed in one of the five wooden cabins on stilts that are scattered in the bush and made sure that every evening I monitored my intake of water due to the proximity of my hut to the toilets and all creatures great and small right to roam rule. The other two main buildings (very open and wooden sums them up best) are the game viewing tower, the perfect location for a drink as the sun goes down and it provides a stunning 360 degree view over the bushveld out towards the Drakensberg Mountains, and which accommodates the kitchen beneath it. Then there is the office where the ever so slightly eccentric scientists, rangers, researchers get their work done.

I should really make a formal introduction of Craig Spencer who heads up the team of highly qualified people.  Craig is the scientist (yes a slightly mad one) who analyses the data, writes the papers and does other important scientific things.  He has a number of degrees behind him a wealth of experience in the conservation of wildlife that is best explained by the man himself.

Spencer is a lean, tanned, enchanting eyed, charismatic character who is passionate about the protection of wildlife. In my opinion the world needs more people like him to ensure a secure future for our wildlife.

There are a number of aspects to the research and work that goes on at Balule.  There are basic things such as maintaining roads (put a saw in my hand and I am a happy woman removing trees from our path!); erosion work; monitoring boreholes to check ground water levels are not being affected by the various lodges; monitoring the need (or lack thereof) of water holes, to more in depth research such as identifying elephants in the area which they collaborate with other researchers to establish movement patterns, herd sizes etc; tree monitoring to establish how much damage to trees is done by elephants which will hopefully prove the idea that elephants are environmental moulders

rather than environmental destroyers; and finally game counts which are carried out almost daily and will hopefully cut out the need for disruptive and expensive aerial game counts and give more accurate information on the number and composition of mammals of Balule, and then can be used as a future way for counting game in other areas.  This data will be given to the head warden so he has hard facts behind future management policies.  Spencer says it will take five years to collect all the data he needs.

My adventures in Camp Paradise will continue …..

And slivers of moonlight danced

The poachers were up to their old tricks once more

With a bunch of money to gain.

The Rhino was unaware of her fate that night

While grazing on the grass

Her baby laid cocooned in her womb

Until the bad men came to fight.

They shot her once and then once more

With no feelings of remorse

They worried not whether she suffered from pain

They severed her horn and half of her face

Whilst she lay in the darkness in pain

They moved quite fast leaving nothing behind

But bloodshed and shame on the human race.

As she took her last breath on that fateful night

People raced to her side to help

But she had died and her baby had too

They were greeted by a saddening sight.

We cannot continue to let this go on

We certainly can’t do it alone

We need the world to help us fight

And continue till the battle’s been won.